Having found in Strength & Honour a wonderful wargames rules set I could not help myself to attempt to write up a string of scenarios using as inspiration the wonderful Bibracte Campaign shared by Mark Backhouse, which happens also to be the author of said rules book.

I cannot remember the last time that a miniatures rules set grabbed me as such, maybe not in 30 years, and I do not want to diminish all the good games I’ve had but there’s those defining moments in the hobby and having discovered Strength & Honour was one of those.

I am not a numbers person, thus visual explanations work best. Tell me a good story, don’t dump a log of dice rolls. That’s how it rolls on my end and the cinematic nature of games representation on the table does wonders for my own pleasure when, well, playing them.

Strength & Honour delivers to me that cinematic overview of the battlefield from the point of view of a bird and commanding wings like a king, an emperor, a consul, would do.

Enough, let’s get into the thick of it.

Sulla has defeated Scipio Asiaticus and Sertorius, being a supporter of the latter, moved for a time to Africa.

It is of note that the naming conventions we use today in western Europe and even beyond, albeit originating from the Roman organization and naming conventions, may not correlate entirely to what was used in Roman times. The map below should help.

Sertorius did return to Hispania and immediately found support with the Lusitanians and their friends, mostly all the peoples from the western reaches of the peninsula.

This would throw the Republic against Sertorius given that Hispania, with the rich deposits of copper, zinc, iron, lead, silver, and not last, lapis specularis, a type of translucid gypsum used in roman glassworks, was not, could not, would not, fall outside the control of Rome.

Sertorius and the Lusitanians initial “rebellion” quickly inflamed the entire peninsula and it is also of note that Pompey the Great was the last great opponent of Sertorius. 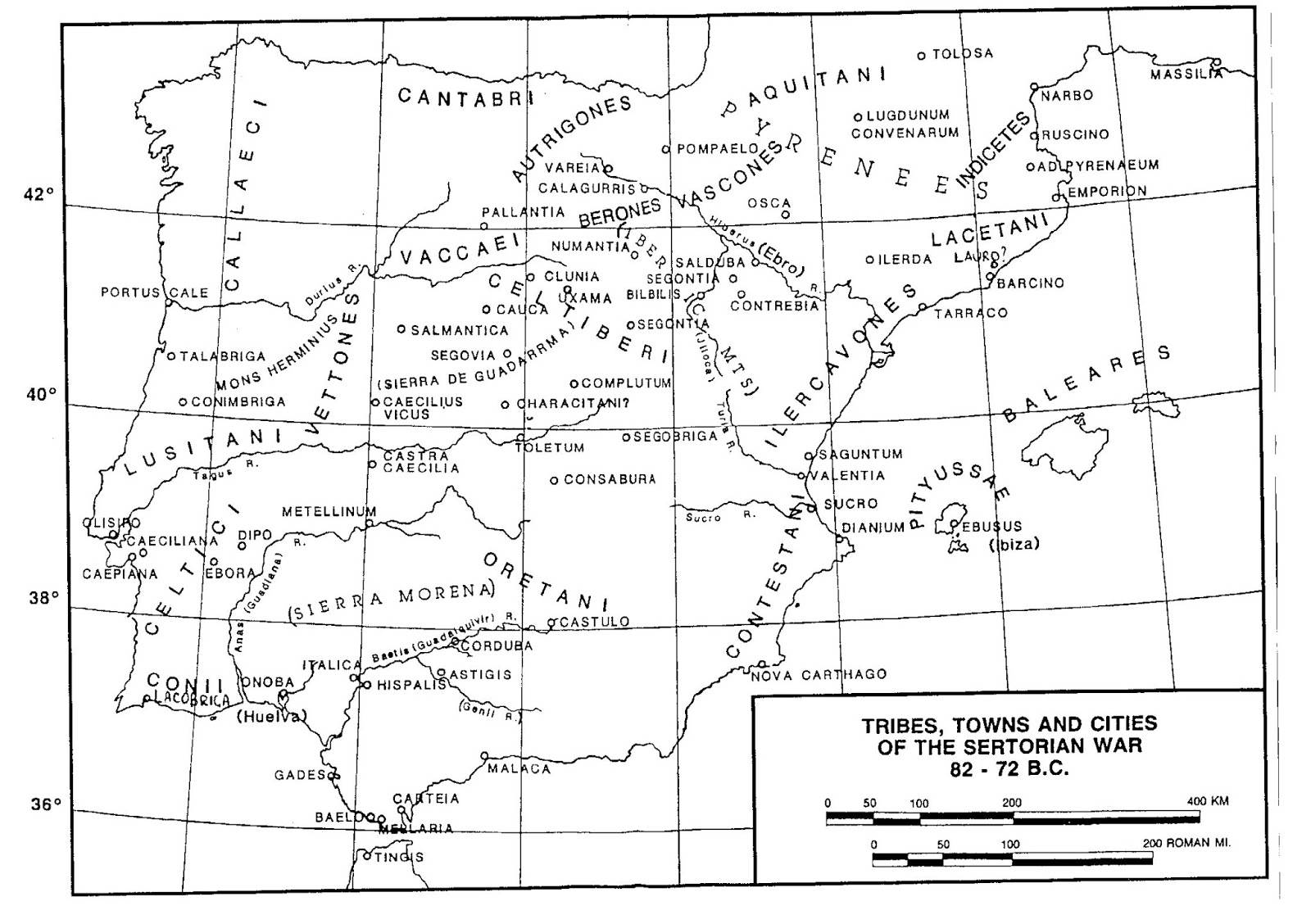 The Roman Iberia was divided with loyalties and Lusitanians mainly, as always fervently independent, pledged their support to Sertorius as it meant severing ties with the established Roman governorship. Eventually it became known as the “roman general that turned native” given his nature in dealing with all the tribes. Most notably he overturned many of the provincial laws, such as forced labour to support the legions.

Battle at the river Baetis 80 BC ( modern name Guadalquivir )

This battle is the first big victory of Sertorius after the return from Africa following his escape due to Sulla’s destruction of Scipio Asiaticus force, of which Sertorius was part.

The core of the army are his veterans and mercenaries from Libya, all grouped up in a single force. 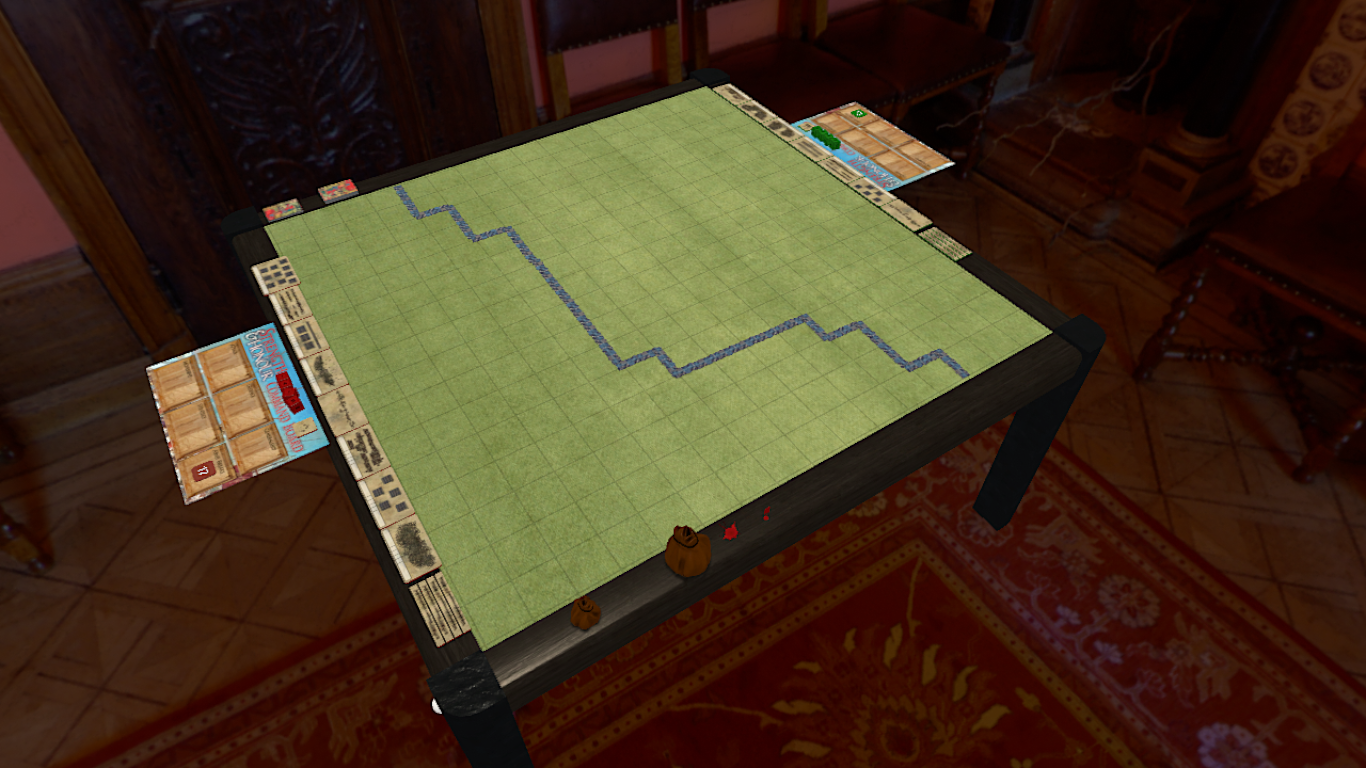 Example of a map created ( is 16 x 16 ). You may create the map as you wish as long and both sides of the river are roughly equal areas. A straight river might do but is certainly dull.

Both armies’ deployment must be within the zones define as:

Sertorius’ Lusitani Caetrati count as a Formed Unit in Combat for any and all Pushed Back purposes but not in combat Shooting. This is tied to the Ferocious Charge ability of the contingents.

The Lusitanians are extremely competent at taking advantage of the terrain and acting in a loose formation, harassing the enemy with projectiles from slings, with darts and javelins but concentrating in melee whenever a gap developed and opportunity appeared, in a furious charge.

Fufidius’ Mercenaries are Undecided. The contingent may only activate Combat/Charge after the first friendly result of an enemy Push Back.

The loyalties of the tribes in the Peninsula got shaken to the core with Sulla’s wars and the return of Sertorius making the western tribes join his cause made the eastern provinces tribes uneasy on what side to support. Fufidius must show the commitment to battle if the loyalty of the eastern tribes is to be won ( this may affect future battles of the campaign ! ).

Record all Points relevant to Campaign progression as all will be used at a later scenario.

This victory won Sertorius a very welcome period of relative peace in which some reforms were enacted, at military levels and civilian organisations.

One of the most important ones, and totally opposed to what happened on other occasions across the Republic provinces, Sertorius did not pretend to create imitation legions using local resources. Instead it fused both styles, the lusitanian-iberian flexible hit and run, the combat skirmisher, with the formed rank and file roman legionnaire.
This wasn’t a novelty as the Scutari, in essence what Sertorius revamped again, were used since the Barcas so it was just a method of retraining the new generation to be able to operate in drilled fashion like a manipular legion but also be able to operate in loose formation like the caetrati and take advantage of the mountainous and rocky landscape.